There was an excellent line up of speakers at the Knitting History Forum Conference on Saturday 9th November. Subjects ranging from Aran knits to costumes for film and tv, were presented alongside knitted archeology and the origins of crochet. 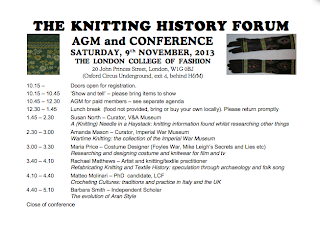 The conference began with a presentation by V&A curator, Susan North. Whilst researching linen fabrics through published inventories, Susan had come across interesting information about knitting in Great Britain pre 1800. Susan looked at who was making the tools for knitting, who was selling them and how households managed their knitted garment needs. My favourite example was the 27 pure silk knitted stockings purchased by Henry Percy, 9th Earl of Northumberland between 1585 and 1587!

Amanda Mason, Historian at The Imperial War Museum talked to us about knitting during the Second World War. Amanda was interviewed for the BBC4 programme, the Fabric of Britain, discussing some of the IWM collection of knitwear made by Prisoners Of War. On the home front, Amanda showed us a typical scene of knitting for the Forces, represented in Eleanor Dunbar's The Knitting Party. Substantial contracts were taken on by The WI and the WRVS, producing socks, sweaters and carrying out approximately 3 million mends. In 2015, uniforms, clothes rations and make do and mend will be the subjects of the IWM Exhibition, Fashion on the Ration: 1940s Street Style.

Costume designer Maria Price has made use of the IWM collection for her research when working on costumes for productions such as Foyle's War. Her other projects include Victoria and Albert and Mike Leigh's Secrets and Lies. Maria uses Angels Costumiers to source much of the period clothing as well as occasionally commissioning knitted garments. She told us that the texture of a garment is very important, but that this attention to detail can be undone if, for example the director chooses subdued lighting. As an example of working within budget constraints, Maria told us that sometimes modern socks are used with a period knitted cuff added to the top!

Rachael Matthews talk was an amazing journey through her creative process. By the end of her wonderful presentation, I felt that I had travelled all over the UK and through time too! In particular, I loved her knitted accounts based on her shop spreadsheets, her knitted relics and archaeological finds and her beautiful 'bed jumper' with darning. Her shop in Bethnal Green is Prick Your Finger.

Matteo Molinari, phd candidate at London College of Fashion, also took us on a journey. This time to discover new insights into the origins of crochet. He presented his research findings on the history of crochet and its similarity to other techniques such as afghan crochet, netting, sprang, nalbinding and tambour. His fascinating profile of Nano Nagle included her role in the development of fine Irish crochet.

Barbara Smith, the publications curator of the Knitting and Crochet guild talked to us about the Evolution of Aran Style. The myths associated with the origins of Aran sweaters were looked at in turn and Barbara had found interesting reference points to show when Aran terminology appeared in knitting pattern books in the UK and the USA. Aran patterns became more standardised in the 1960s and Barbara told us about a possible link to the Clancy Brothers and their USA tour. When a harsh winter was predicted for New York, Mrs Clancy sent over 4 Aran sweaters to keep them warm. The sweaters became their widely publicised trademark image!

Many thanks to the Chair of the Knitting History Forum, Professor Sandy Black for hosting this excellent conference at London College Of Fashion.