At a 'behind-the-scenes' lecture in the V&A's Sackler Centre on Wednesday 27th February, Senior Curator Susan North introduced two recently published books of Seventeenth Century Women's Dress patterns.
Susan shared many of the inspirations and sources of her research with us, including the extensive costume history book reading list. She showed how the approach to documenting and creating historical dress patterns had changed over the years. Most early works relied upon linear drawings and until the Tudor Tailor was published, there had been little direction for actually dressing a person.

Collaborating with Jenny Tiramani was essential to the project. Extensive research in authentic Elizabethan and Jacobean clothing for productions at the Globe Theatre, London had been carried out by Jenny and Luca Costigliolo, Claire Thornton, Armelle Lucas and Christine Prentis, all members of the wardrobe team at the Globe between 1999 and 2005. This team produced the detailed patterns for the V&A books.

A major challenge was to determine the original construction of the seventeenth century garments in the V&A collection without unpicking them. Susan described the process of looking at a complete garment and working out the order of construction as 'sewing backwards'! Once this stage was complete, the team made accurate half size toiles of the garments to be sure that 'sewing forwards' worked too.

More secrets were uncovered when the garments were X-rayed. The X-rays revealed unexpected hidden features and lead to a better understanding of techniques used. For example, whale bones in the watered pink silk stays were sharpened to a point to go through narrow sewn channels, but were also shown on the X-ray as being stitched through. This could only be achieved by soaking the the stays to make them pliable, then threading and stitching them when still wet.

X rays of beautiful lace edged gloves similar to the ones below, revealed the tiny selvedges used in the seams.
Although originally planned as one book, the beautiful photography and level of detail meant two volumes were needed to include everything the authors felt was key to understanding the secrets of the garments. Susan's talk gave us an excellent insight into how much there is to be discovered in these fascinating books.
Posted by Emma Vining at 17:38 No comments:

My Sugar Kelp Sweater Pattern has been published in this month's Knitter Magazine! Sugar Kelp is on the front page of Issue 55, shown as the textured sweater on the lower left. 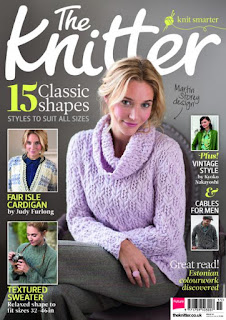 Inspired by a walk along the beach, the cable panel design is based on the beautiful Sugar Kelp washed up on the shore. The cables and cluster stitches form a lattice on the front and back of the sweater. The fit is loose and relaxed. You can have a closer look at the the photos on the Making Spot Website.

Sid Bryan, Joe Bates and Cozette McCreery are the designers behind Sister by Sibling who, according to their British Fashion Council profile, "....like mutating classic, traditional knitwear designs or techniques so the Knit Monster Scare Isle comes to mind."

Their ideal client is "a girl with a good sense of humour and a fun, happy attitude" and their knit creations shown at London Fashion Week yesterday, reflect this perfectly. Enjoy! 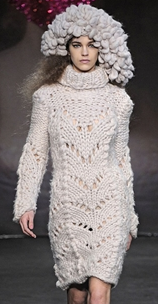 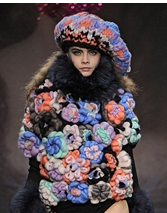 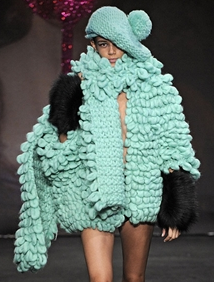 Garments in a window display at Selfridges, London, made shoppers stop and stare! Created from recycled DVDs, these amazing dresses by Kong Fan Fan are ideal inspiration for modular knitting or crochet.

This window display is part of the No Noise initiative at Selfridges that celebrates the 'power of quiet'.
Posted by Emma Vining at 11:38 No comments:

Museums and Galleries are included in the second part of The Sunday Times App list. There are some excellent Museum apps for either visiting suggestions, planning a museum trip or just browsing the collections. Here are three that I am enjoying looking at.

The Art Guide, offers a free mobile app (iPhone, Android) to promote museums and galleries across the  whole of the UK. The 'What to See' section is a great way of keeping up with current exhibitions. 'Last Chance' reminds you of which exhibitions are about to end and 'Opening Soon' helps you plan future visits. 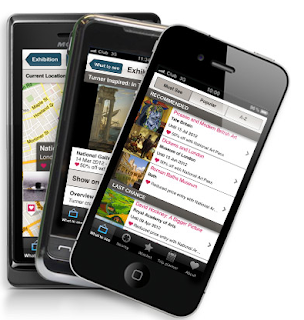 The app from MOMA, Museum of Modern Art in New York is the next best thing to visiting! As well as a 'What's On' section, the app has a detailed 'Search the Collection' feature and an in depth A-Z of Art terms and artists. For example, selecting A for Arts and Crafts leads you to a definition of the Arts and Crafts Movement, then on to pictures of related objects, including work by William Morris and Charles Rennie Mackintosh. The app also includes links to MOMA podcasts and MOMA on iTunesU where there are short features on artists and subjects relating to the Museum.

The Bauhaus app (iPhone, free) is a guide to the Bauhaus Museum in Berlin, in German or English. There is an excellent set of illustrated and audio guides to the Bauhaus Collection, explaining objects, items and teaching within the Bauhaus School, with particular reference to well known artists such as Wassily Kandinsky and Paul Klee. I found these explanations really interesting, having seen the Bauhaus: Art as Life exhibition at the Barbican Art Gallery last year. 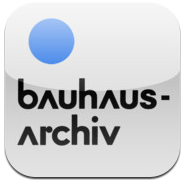