2018 is a very special year for the Knitting & Crochet Guild (KCG). Founded in 1978, with the aim of preserving our shared knitting and crochet heritage, the Guild is now celebrating its 40th birthday! Yes, there was a celebration cake and as always, there was a varied and fascinating programme on offer. This year's Convention (July 6th to 8th 2018) began with an introductory welcome meeting before we all enjoyed a delicious dinner provided by the excellent Radcliffe Conference Centre at the University of Warwick.


Our keynote speaker after dinner was Sasha Kagan, who is a patron of the Guild. Sasha told us about her life in knitting and crochet, beginning with learning to knit with her mother. After moving to Wales, Sasha’s business began to grow and her distinctive designs became instantly recognisable. We all enjoyed seeing many of Sasha’s designs close up, especially her stunning crochet shawl for the Rowan Yarns 40th Anniversary, also being celebrated this year. When asked why she became a patron of the Guild, Sasha replied that she is passionate about knitting and crochet because “anything made by hand has a touch of the person’s spirit in it” a sentiment we all wholeheartedly agreed with!

A full day on Saturday began with a talk by an honorary member of the Guild, crochet expert Pauline Turner. As the first editor of the journal Slipknot, Pauline had many fascinating insights into the Guild’s early history. Pauline’s career in crochet has resulted in her travelling all over the world. She is the author of several renowned books on crochet and design and the founder the first international distance learning diploma course for crochet. When asked about some of the more unusual challenges she has undertaken, Pauline told us about crocheting onto ice-cream! Her many achievements are the result of meticulous planning and as Pauline remarked, “if you are going to succeed, you have to prepare”.

During the afternoon session, Tricia Basham and I shared some of the discoveries from our work on the Gladys Jeskins sampler. Gladys was an amazing knitter who created a continuous piece of knitting containing 899 stitch patterns. The sampler is over 50m long and was still a work in progress on the needles when it was donated to the Guild some years ago. With the help of all the conference delegates, we unrolled almost the whole length of knitting! We had also brought along the accessories inspired by the sampler that now feature in the Guild’s Ruby Celebration ebook for members. Each of the accessory designs by Tricia, Juliet Bernard and myself were inspired by single stitch patterns in the sampler. My Ruby half pi shawl (knitted in Fyberspates Scrumptious 4ply) and Tulip Scarf (knitted in Willow Knits Silk yarn) took pattern number 40 as the starting point.

Once we had rolled the sampler up again (no small task!), it was time for the afternoon workshops. There were a wide variety of workshops available and I had chosen I cord and it’s uses with Clare Griffel. Claire’s workshop covered icord cast off and applied icord and there was also the option to create an icord necklace. Claire had brought along some lovely examples. I managed to complete all sides of my swatch in icord edging and look forward to using this excellent technique again soon. Thank you Claire!

Dinner was followed by one of the highlights of the convention, Show and Tell. Led by excellent compere Rachel Lemon, we saw many garments created by members that were either inspired by, or made in, the 1970s. The skill level on show was amazing and this was a great moment for us to have our celebration cake!

Sunday began with a talk by Alison White from Arena Travel, showcasing a variety of exciting knitting and crochet holidays. Marion Dye also updated us all on plans for a knitting cruise to Norway in May 2019. There will be workshops co-ordinated by Marion and she had just received the exciting news that she will be giving an on-board presentation all about the Guild!

During the morning workshop session, Tricia and I ran a joint workshop on sampling the sampler. Our participants were able to take a close look at Gladys’s work and many have been inspired to create their own designs. Tricia had created a beautiful series of boards displaying the samples that had been reknitted by guild members. These samples show 60 of Gladys’s patterns over a larger knitted swatch. We had a wonderful discussion about the sampler and about Gladys and her early career as a comptometer operator. It was fascinating to hear about the skill and speed required to operate these early calculating machines. 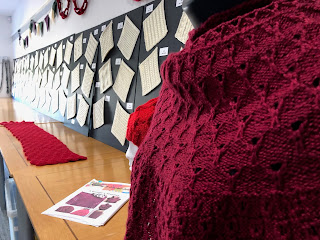 After lunch, it was time for some forward planning and to say thank you to everyone involved in running this successful event, in particular, the Board Members and the local Birmingham Branch members who coordinated and organised the whole Convention weekend. Individual members volunteered to run knitting and crochet workshops and everyone contributed excellent ideas, suggestions and discussions throughout the Convention. The Guild's theme for 2018 is "Pass on the Passion" and, judging by the enthusiasm on show at the Convention, we are all looking forward to doing just that!
Posted by Emma Vining at 08:58 No comments: