Southampton's Sea City Museum Pavilion is the setting for The First Cut. This fascinating Exhibition brings together a diverse selection of works that all use paper. From tiny detailed illuminated book art by Su Blackwell through to the stunning 'Stellar Spire in the Eagle Nebula' installation by Andy Singleton, The First Cut features work by 30 international contemporary artists.


As you enter the Exhibition, work by Andreas Kocks has the appearance of giant paint brush strokes on the wall. On closer inspection, the brush strokes reveal themselves as inky black graphite covered paper which has been cut and layered to make 3D form. Clever pinning raises the work off the wall and creates shadows that add a whole other dimension.


Rob Ryan's 'The Map of My Entire Life' is a huge work that is full of incredibly detailed cuts with text and imagery representing his theme of a melancholic elegy on life and death. Rob Ryan will be speaking at the V&A Museum in November and I am very happy to have a ticket to this talk!

Andy Singleton's Stellar Spire in the Eagle Nebula is a stunning suspended 3D work that is made up of many interwoven hand cut parts. The combination of this complex work and the shadows cast around it makes it move and swirl before your eyes. Visit Andy Singleton's website to see more of his amazing works.

The animation by Andersen M Studio will stop you in your tracks! I watched several times, completely captivated by the movement and detail in this paper cut animation. A still from one scene is shown in the artist book next to the screen. Going West can be viewed on the Andersen M Studio website.

Su Blackwell's works are full of exquisite tiny hand cut details that encourage you to look very closely to admire them. Roses from Sonnets is a handcut 3D book sculpture on display. Su Blackwell's website has more examples of her beautiful work.

Laura Cooperman's 'Spin' combines paper cuts with the movement of rotating gears. Turning the wheel changes the shadows and orientations, making this a beautiful, dynamic, interactive work. More information can be found on Laura Cooperman's website.

There are many more outstanding works to see in this exhibition and each is beautifully crafted and displayed. The Sea City Museum has lots of related events for all ages to explore and enjoy paper cutting and manipulation.

The First Cut Exhibition is on until 12th January 2014.

My Drumlins Cowl in the Knitter Magazine, Issue 64

It is lovely to see my Drumlins Cowl in the Knitter Magazine, Issue 64. Drumlins is knitted in Malabrigo Worsted yarn that has the perfect balance of softness and structure.

The pattern for this Cowl was inspired by glacial landscapes formed during the Ice Age - in particular, small rounded hills called drumlins and depressions in the ground made by melting ice, called kettle holes.

The cowl can be worn right side out, with the drumlin mounds nestled in the kettle holes or wrong side out with the mounds pushed in to make kettle holes.

The pattern is in the Cosy Cable Knits Supplement included with this month's issue along with a gorgeous Open Cable Sleeve sweater by Debbie Bliss and a Schachenmayr Original Cape, Legwarmer and Hat set of patterns called Agnethe.

Day four was a little sad for us all on the Knitted Textiles Award Stand as it was our last day to talk to visitors before we packed up for the move to the Harrogate Knitting and Stitching Show, November 21st to 24th 2013.

I finally got the chance to visit the UKHKA Woodland PicKnit in the Palm Court. Up to today it had been too busy to leave our stand in the Textiles Gallery. Lovely to see all the knitting that has been going on during the Show.


I also took the opportunity to walk around the Show first thing in the morning. I saw so much gorgeous yarn in an incredible array of shades and met some very friendly people on the exhibitor stands.


Happily for knitters everywhere there is much more knitting going on during Wool Week this week!  The Campaign for Wool has lots of events listed on it's website, such as Pic Knit at the Yorkshire Sculpture Park on 20th October and Knit Nation at John Lewis in London and Edinburgh.

Day Three at the Knitting and Stitching Show was one of the busiest days I have ever seen at Alexandra Palace! We were very happy that so many enthusiastic visitors came to talk to us on the Knitted Textile Awards Stand.

During the afternoon, the Winners of the Knitted Textile Awards, Open Category were announced. Gold in the Open Category went to the extremely talented Sally Spinks with her fabulous work, Random Acts of Kindness. As well as being incredibly delicate and beautiful, Sally's work brought a smile to the face of every visitor. Visit Sally's website to see the wonderful images and contents of the bell jars more closely.

Silver in the Open Category went to Nicky Barfoot and her beautiful knitted life paintings. Visit Nicky's blog to see the work in detail and how she developed her idea from her amazing life paintings to the stunning knitted art she displayed at Alexandra Palace.

Congratulations to Sally and Nicky!
Posted by Emma Vining at 20:12 1 comment:

Another fantastic day at the Knitting and Stitching Show! I arrived to bright sun on Alexandra Palace and rain clouds over London. 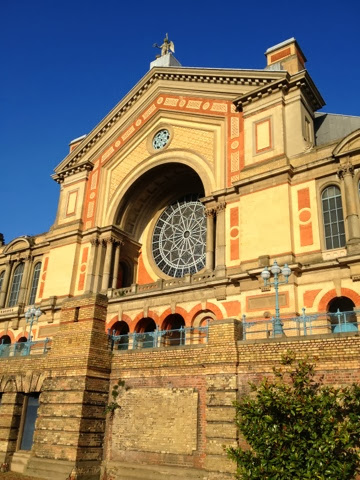 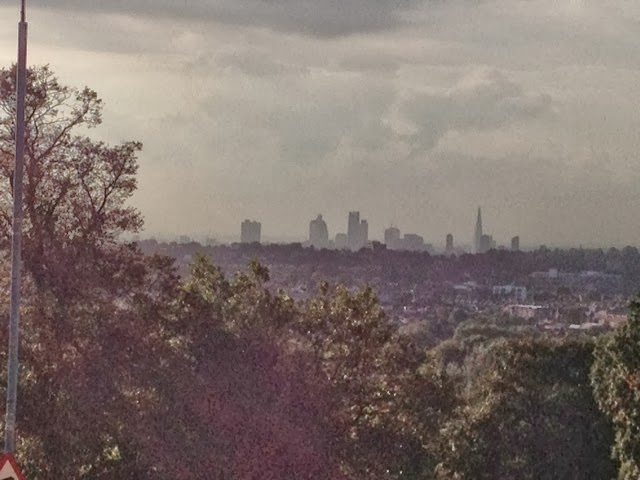 Inside the Show, we had another very busy day with lots of visitors to the UKHKA Knitted Textile Awards Stand. It was so great to talk to everyone who came along to TG Q13. Thank you for all the lovely comments about my Kagome Cardigan.
I was able to have a very quick look around the rest of the Show during the last hour when the aisles were a little clearer. 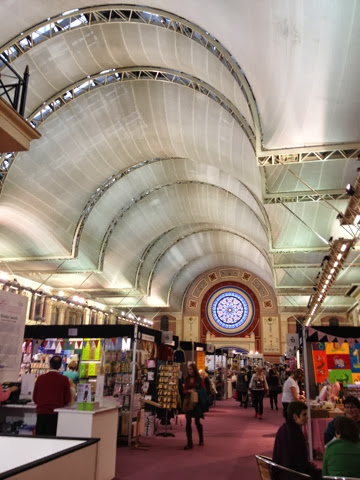 I also had a lovely chat with Malabrigo Yarns, who said they were bringing in more shades of yarn in the morning. That will be my first stop before being back on the stand to talk to more visitors.
Really looking forward to Day Three!
Posted by Emma Vining at 21:36 No comments:

Day One at the Knitting & Stitching Show

What a wonderful day talking about knit and design at the Knitting & Stitching Show!
From the moment the doors opened at 10am, our stand, TG Q13, had a constant stream of visitors. It was great to show our work to so many interested and knowledgable knitters. 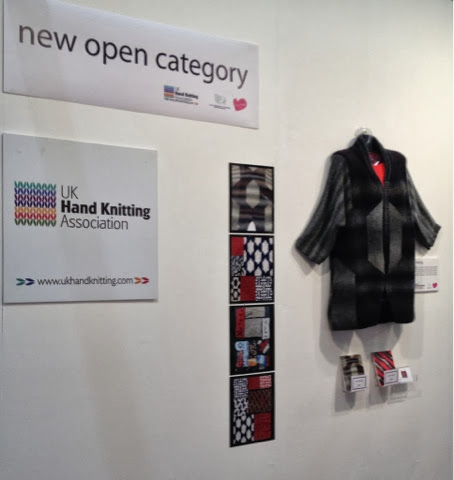 The new UKHKA Knitted Textile Awards Open Category has lots to for visitors to see as our work is so diverse in all aspects. I am very proud to be 'on the wall' alongside all this great talent.
Can't wait for day two!
Posted by Emma Vining at 22:24 1 comment:

Today was set up day for the UKHKA Knitted Textile Awards at the Knitting and Stitching Show, Alexandra Palace. Arriving at Alexandra Palace at 8am, all was very quiet. The main entrance was all ready to go, but completely empty. I have never seen it like this before!

The view over London from the top of the hill was as amazing as ever.

As finalists arrived throughout the morning, the incredibly calm curator, Fiona Ross guided everyone through displaying their work. As the morning went on, the stand went from bare white to being full of colour and exciting knits of all descriptions. I am very happy to have my work up on the wall with all the other finalists. Just the name plaques to add and the photos to be fully stuck down and all is ready to go for tomorrow morning!

I am so happy with the location of our stand.  We are on stand Q13 in the Textiles Gallery. Round the corner you will find the wonderful Art Van Go and the excellent Loop. Also spotted were Malabrigo Yarns, Shilasdair and the enormous Coats Crafts stand that includes Rowan Yarns. Texere yarns are just through the door in the Main Hall, as is the incredibly colourful Collinette stand.

I am really looking forward to the next few days, meeting lots of visitors, looking at all the other designs and visiting as many exhibitor stands as I can!

My Curves & Corners Scarf pattern is now available in my Ravelry Store. The scarf is knitted in sections that are picked up as you go. The corners are mitred corners with a garter stitch ridge pattern and the curves are created using short row shaping in a rib and twisted stitch pattern. The stitch patterns are reversible.
The scarf begins with a little corner and a short curve and then builds up to bigger and bigger sections. As the sections are worked and the scarf grows longer, it begins to curl. The length along inside curved edge is approximately 170cm/ 67in.
There are many ways to wear Curves & Corners; draped lengthwise, wrapped around several times or folded in half and looped through itself. All ways of wearing make the corners stand out and give great structure to the scarf. When not being worn, the scarf can be coiled up and looks good stacked from small to large corner. 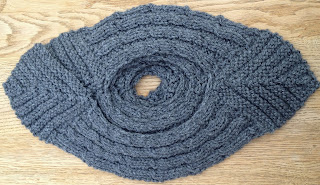 The scarf shown in the pattern is knitted using 3x50g balls of Sirdar Click Chunky with Wool in shade (119) Flinty (70% Acrylic, 30% Wool, 75m/50g). Please take a look at my Ravelry Projects page for versions in other yarns. Generally, the heavier the weight of the yarn the bigger the corners and curves will be. I have also knitted a version in 4ply yarn which results in a very delicate twist, but needs lots of extra sections worked.
This pattern is very adaptable and I hope knitters will enjoy making this versatile scarf.
Posted by Emma Vining at 16:31 No comments: