Introducing her new book, Knitting: Fashion, Industry, Craft, in a lecture at the V&A on Thursday 15th November 2012, Professor Sandy Black began by asking the question, 'What is knitting?' 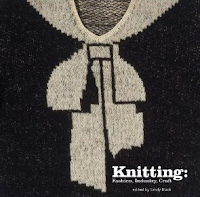 Using the four sections of her book to answer the question, Sandy showed us how she had been inspired by the V&A Collections. Here are some of my highlights.
Part One: The Origins of Knitting, 3rd Century to late 19th Century.
Knitting can be said to have begun with heads, hands and feet! Sandy showed us several examples including Coptic socks found in Egypt , Tudor caps from London and ornate silk stockings for men, before moving on to a stunning 17th Century boucle jacket. The highlight of this section for me was an 18th Century item, the 'Dutch Petticoat'. The origins of the mechanisation of knitting began with William Lee's knitting frame in 1589. 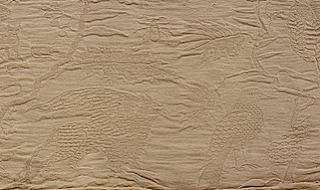 18th Century Dutch Petticoat (source: V&A)
Part Two: Livelihood and Industry in Hand and Machine Knitting, 17th - 21st Century.
During this time period, whole families knitted to supplement incomes. Knitting was taught in schools and workhouses to 'keep idle hands busy'. Detailed instruction manuals containing tiny examples of knitting were used at this time. During the early 20th Century Fair Isle knits became a fashion classic when worn by the Prince of Wales and Dr Jaeger began his business with 'hygienic' socks featuring separate toes. Couture knitting in the postwar period was illustrated by the Maria Lick Szanto designs (a review of Sandy's talk on the Szanto designs appears in an earlier post).
Part Three: Knitting in the Home from the 18th Century to present.
Knitting patterns gradually became more widespread and Sandy showed us some lovely examples from Welsons in the 1890s, Woolcraft in the 1920s and Patrons & Baldwins in the 1930s. The radical changes in home knitting were shown by examples from sportswear, WWII knitting, 1950s glamour knitting, home machine knitting through to Freddie Robbins' Odd Gloves.
Part Four: Classics to Couture 1900 to Now.
Over this period, knitting has constantly moved in and out of fashion, from the Polka jackets of the mid 19th Century, Chanel and Schiaparelli designs of the 1920s through Bill Gibb and Kaffe Fassett to Biba and Missoni and on to Kenzo, Sonya Rykiel, Mark Fast and Peter Pillotto to name only a few. Using these examples and more, Sandy took us on a rapid journey through the engineering possibilities of knitting.
So, was the opening question, 'What is knitting?' answered? It certainly was and in such detail and in so many interesting ways that I cant wait to read even more in the book itself!
Posted by Emma Vining at 12:14